JUNE 1st, 2019
NEW STUDIO, BROOKLYN, NEW YORK - Welcome to the new studio and show room! I am sharing the space with my colleague and sculptor, André Brissette. We are open and ready for visitors. 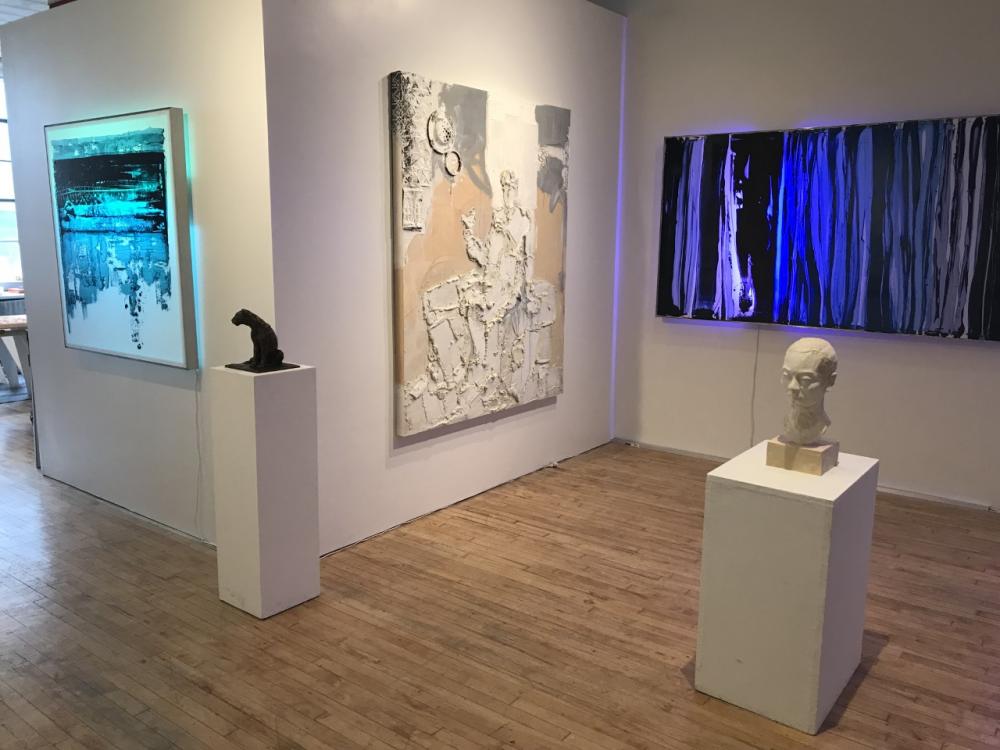 MARCH 25th, 2019
SINERGIA - MEXICALI, MEXICO - Note the participation of Sylvain Tremblay at the 1st international exhibition of painting and artists meeting, which was organized by CETYS university from March 25 to 30, 2019.

This event aimed to enrich integral training in the CETYS student and academic community and to provide an experience that raises awareness and praises the impact of art on the constitution as a human being.

SINERGIA is also seeking to increase the number of artistic spaces in Mexico's border area, and to promote access to art and culture in the community of Baja California. 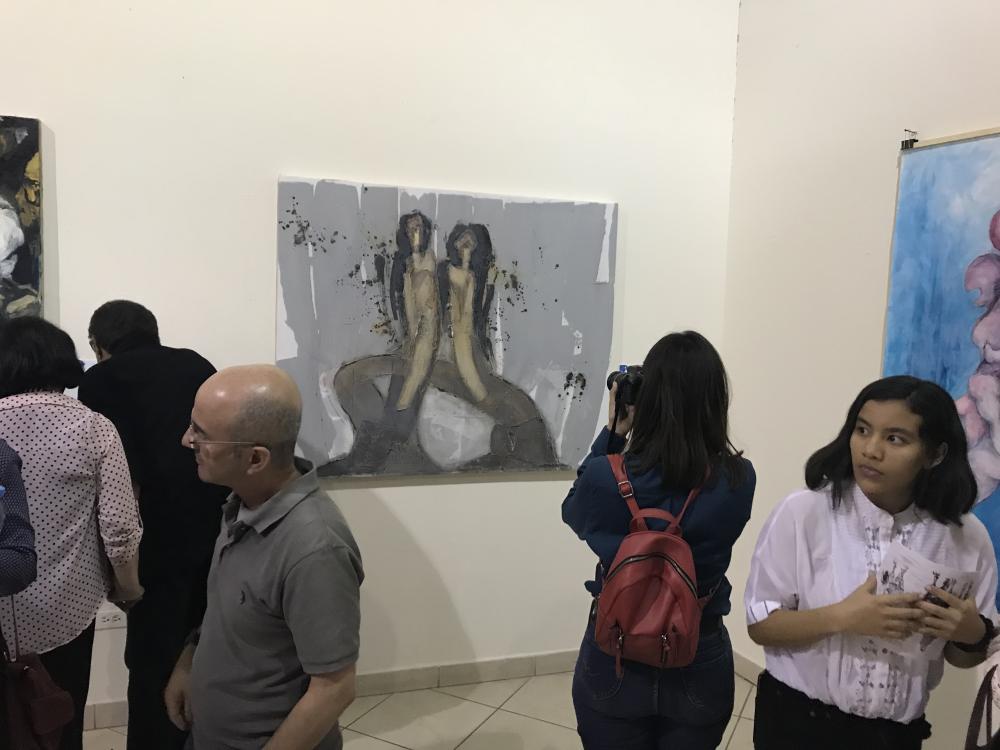 FEBRUARY 13th, 2018
GRAND PALAIS - PARIS, FRANCE - Being a member of Eureka Global Art, Sylvain Tremblay was honored to represent Canadian International Artist to participate in the oldest and the most prestigious exhibition in Europe.

Tremblay have received the Golden Award in abstract and creative mixed media. 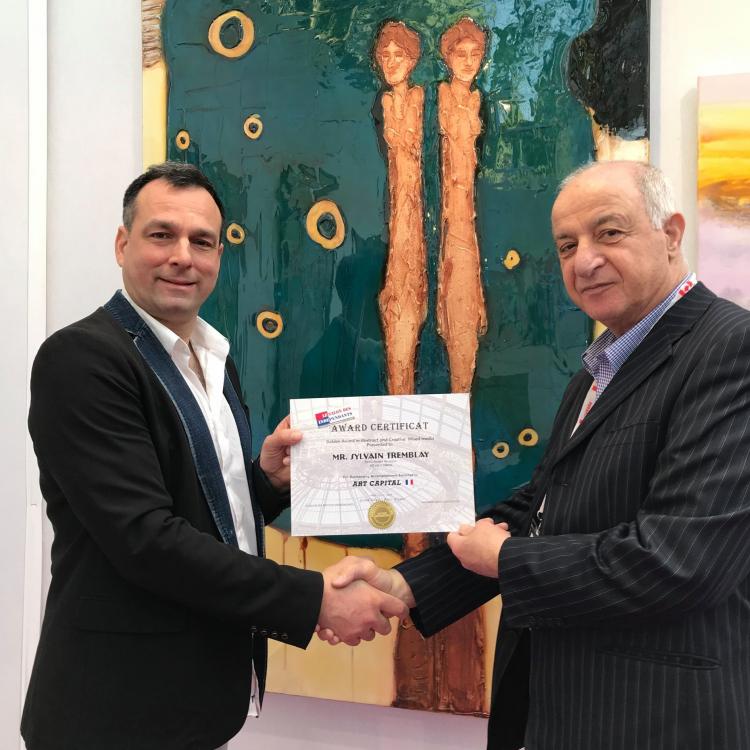 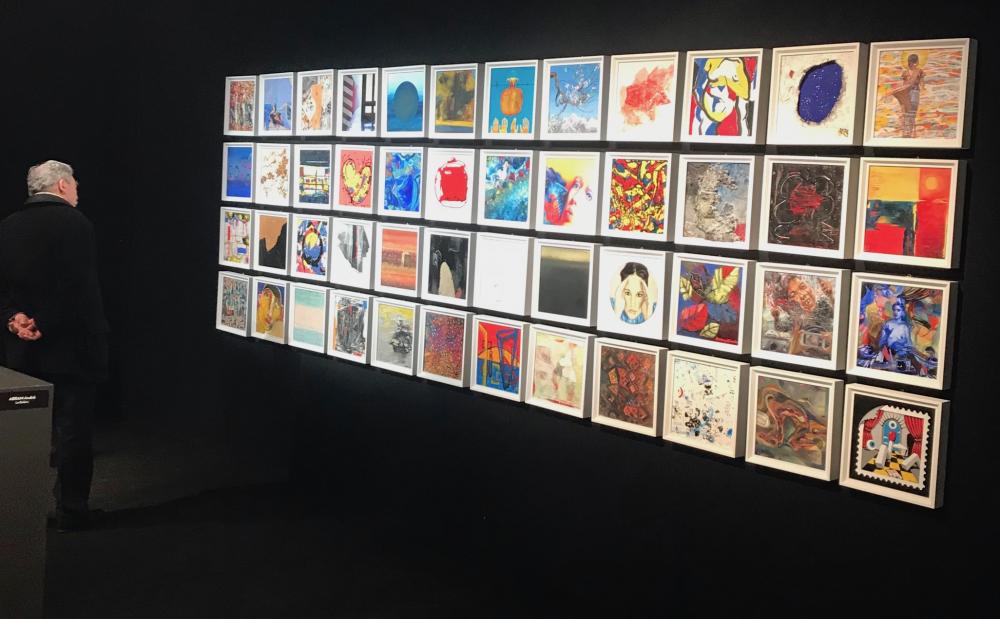 Following his NO GENDER exhibition at the Never Apart art centre in 2016, Tremblay returned with the same exuberant, contagious energy to present work that is entirely different. After nearly ten years spent amid the urban fauna of Beijing, Dubai and Brooklyn (where the artist has chosen to make his home), his inspiring, thrilling adventures have led him to explore new art techniques, push his artistic limits still farther, and reaffirm his art. 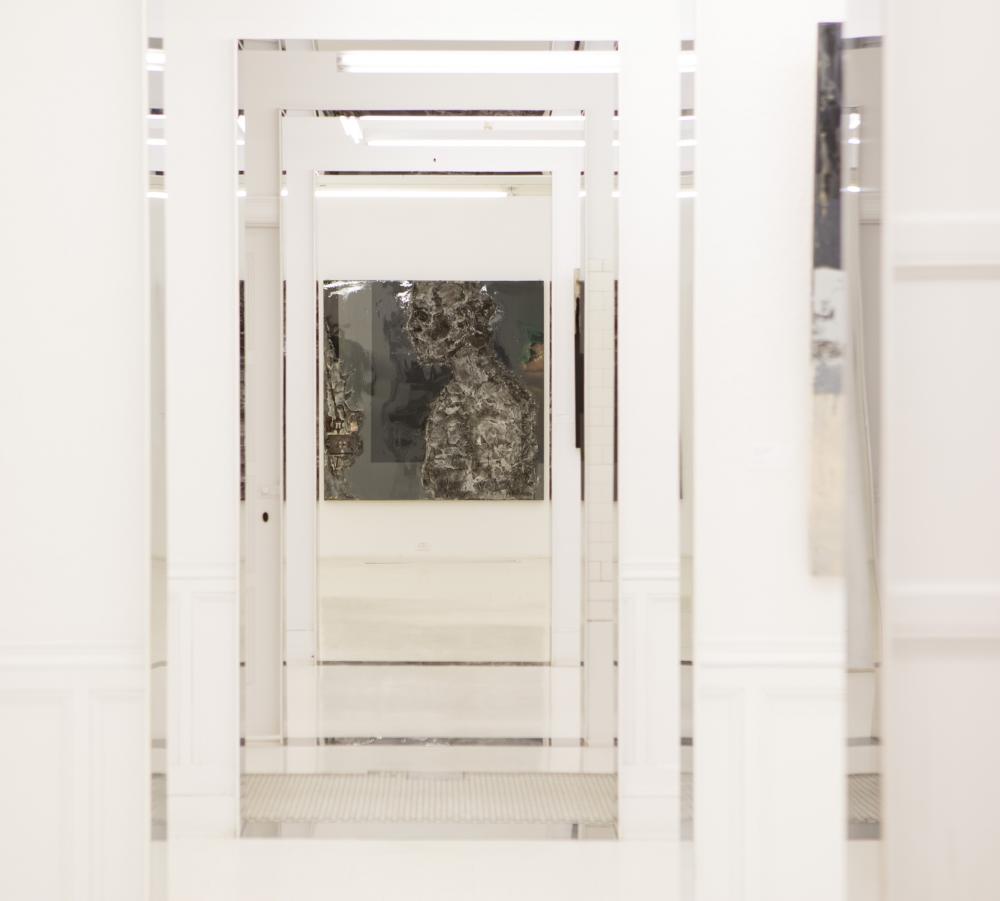 Continuing his international tour in Toronto, many of the featured works in the gallery are also be included in the book. 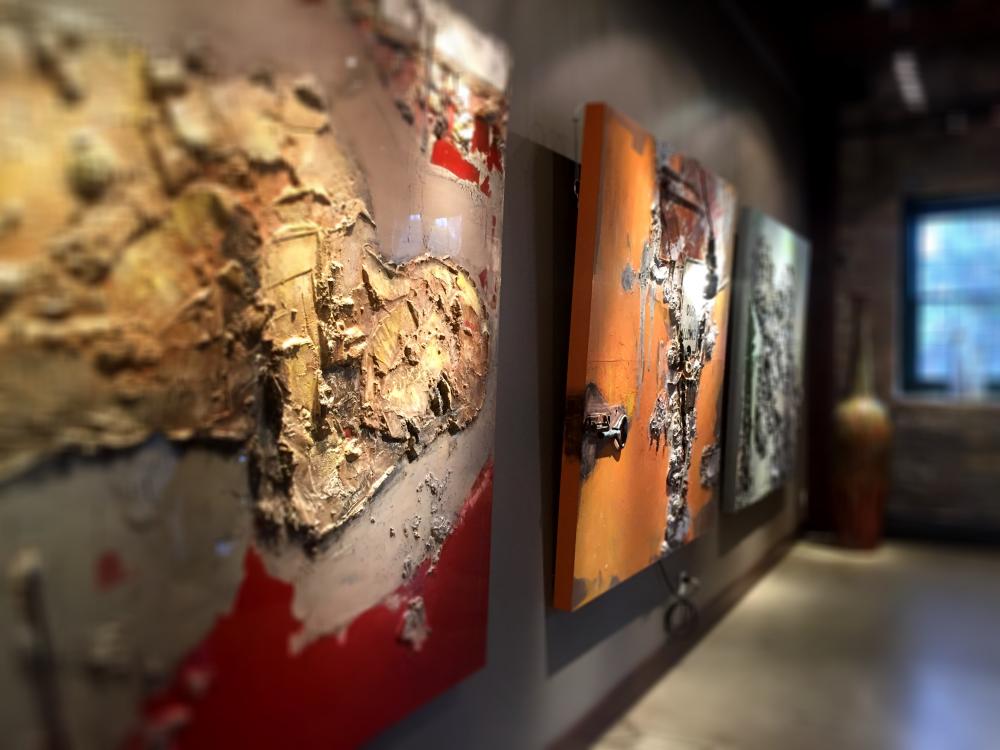 SEPTEMBER 2nd, 2017
GALERIE D'ART IRIS - BAIE-SAINT-PAUL, CANADA - After a long wait of 10 years, the GALERIE D'ART IRIS was presenting a premiere launch of the international tour of the artist Sylvain Tremblay.

It was on June 24th, 2017 that the artist gave a live artistic performance, in the Château's gardens, using a surprising technique that he has developed during the last few years, and he also hosted in World Premiere a tribute documentary of the great Tuscan master Leonardo da Vinci during the activities commemorating the 500th anniversary of Leonardo da Vinci.

In developing this documentary, Sylvain Tremblay walked in the footsteps of da Vinci which led him from Italy to France. The documentary was produced by himself and the Canadian University of Dubai, and directed by Stéphane Chabas.

Sylvain Tremblay celebrates Leonardo da Vinci and brings new life to his visionary and creative genius, as in the portraits he made of the Master or in his reinterpretation of the Last Supper. Da Vinci devoted 30 years of his life to the study of anatomy. In his paintings, the Québec artist finds new ways of expressing the human body. He refers to himself as a conceptual artist who plays with textures, representing flesh as the expression of the body, conveying emotions and sensitivity.

MARCH 9th, 2017
MIAMI, UNITED STATES - Thursday, March 09, was the opening night of the exhibition to commemorate the 150th anniversary of the Canadian Confederation in Miami.

The Canadian Consulate of Miami and Macaya Gallery, in conjunction with its network of Canadian artists and curators, present a contemporary art exhibition entitled Made in Canada 150 until March 31.

On the opening night, Sylvain Tremblay wanted to celebrate International Women's Day by doing a live painting of Marilyn Monroe in his own technique. 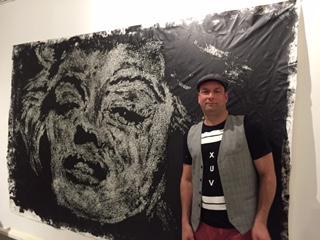 FEBRUARY 23rd, 2017
MONTREAL, CANADA - Sylvain Tremblay is proud to be associated with the first edition of Tombent les masques for the benefit of Suicide Action Montreal which took place on February 23rd. The event, under the honorary presidency of Pierre Karl Peladeau, the participation of Lise Dion, spokesperson of the organization, and Safia Nolin, was a success.

It is an honor for us to announce that the painting ENSEMBLE, offered by Sylvain Tremblay, raised $ 8,000, thanks to Pierre Karl Péladeau who is now the proud owner.

A huge thank you to the Suicide Action Montreal team and congratulations for the $ 165,000 in cash and $ 70,000 in goods and services sponsorship that will enable SAM to continue making a difference in the lives of thousands of Montreal people. 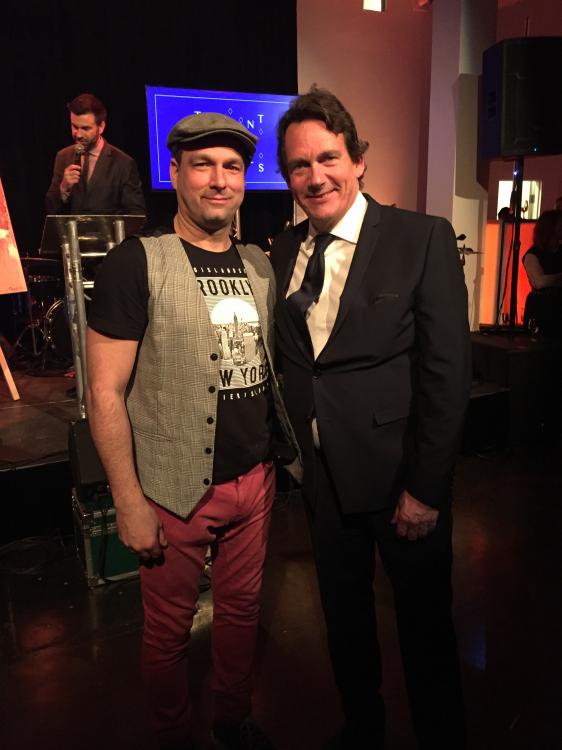 OCTOBER 10th, 2016
HANGZHOU, CHINA - Sylvain Tremblay was one of the 3 artists who represented Canada at the G20 event in Hangzhou, China - International Art Exchange Exhibition.

The original artwork exposed by Sylvain Tremblay was collected by the International Museum of Art in Hangzhou Qianjiang. 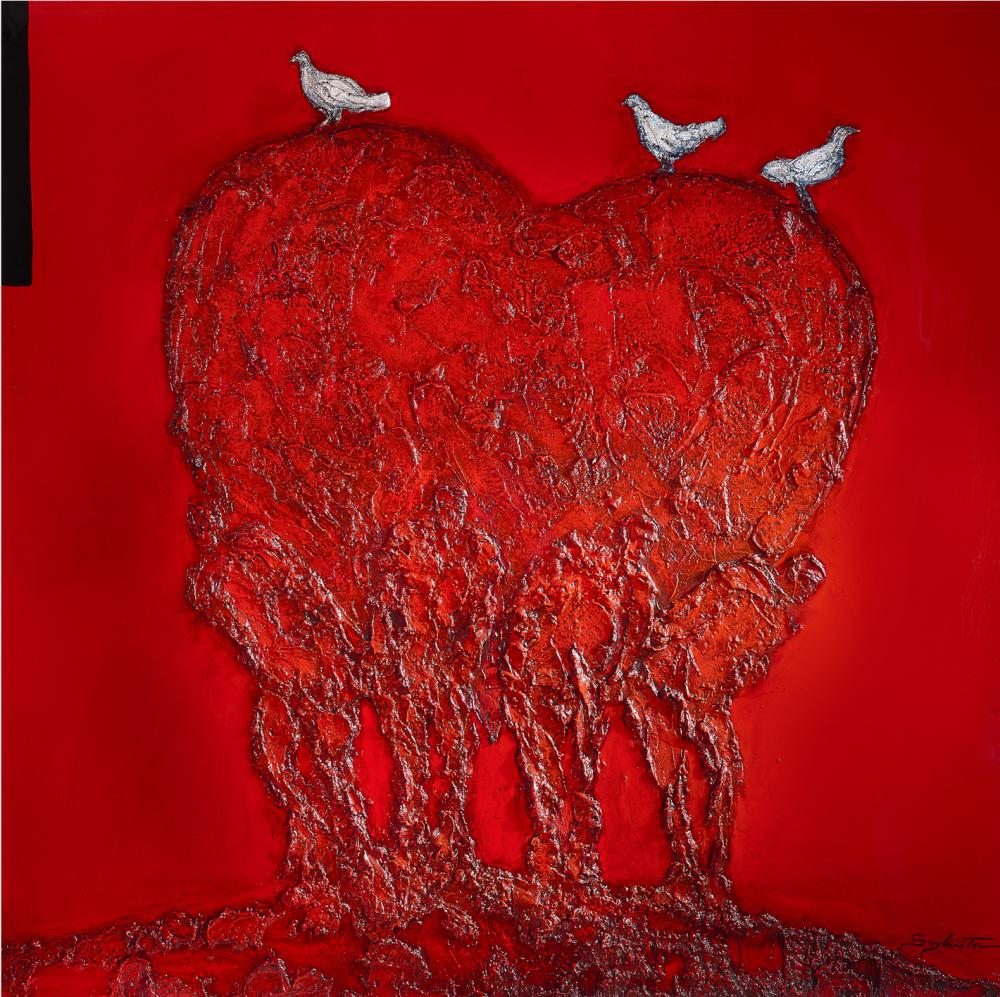 SEPTEMBER 22th, 2016
TORONTO - On September 22, the opening of the collective exhibition for the 10th anniversary of the Thompson Landry Gallery was held in Toronto.

Sylvain Tremblay presented several new works by Brooklyn. The Andy Warhol portrait surprised more than one during the live painting of Sylvain Tremblay.

JULY 1st, 2016
NEW YORK - It is in July 2016 that Sylvain Tremblay gone to leave and dicover Brooklyn, New York. New in his works and technique. You can see them here : BROOK series. 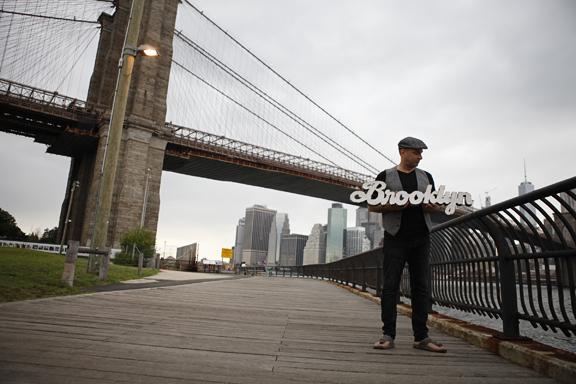 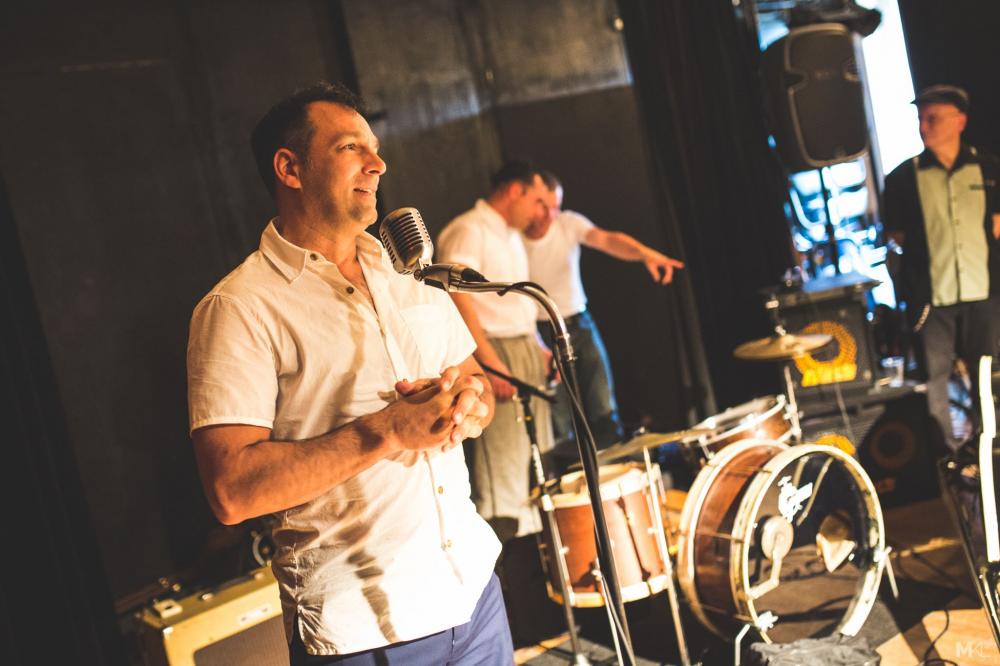 Always with his technique of coconut powder and wax, Tremblay did, this time, the portrait of Jean-Michel Basquiat.

Gift from the "Nassima Royal Hotel" to highlight the official opening of their new club HOBO / Modiva in Dubai. In collaboration with the direction of the Opera Gallery, Sylvain Gaillard. 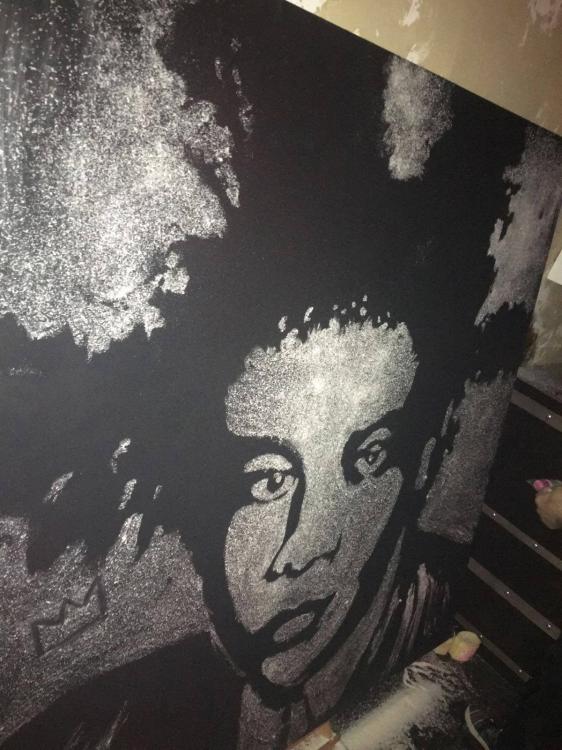 
NOVEMBER 29th, 2015
DUBAI - On November 29 was held the UAE National Day at the Canadian University of Dubai.

Sylvain Tremblay was invited to do live painting to highlight the event and to practice his new technique that was popular with the public on November 2, 2015. 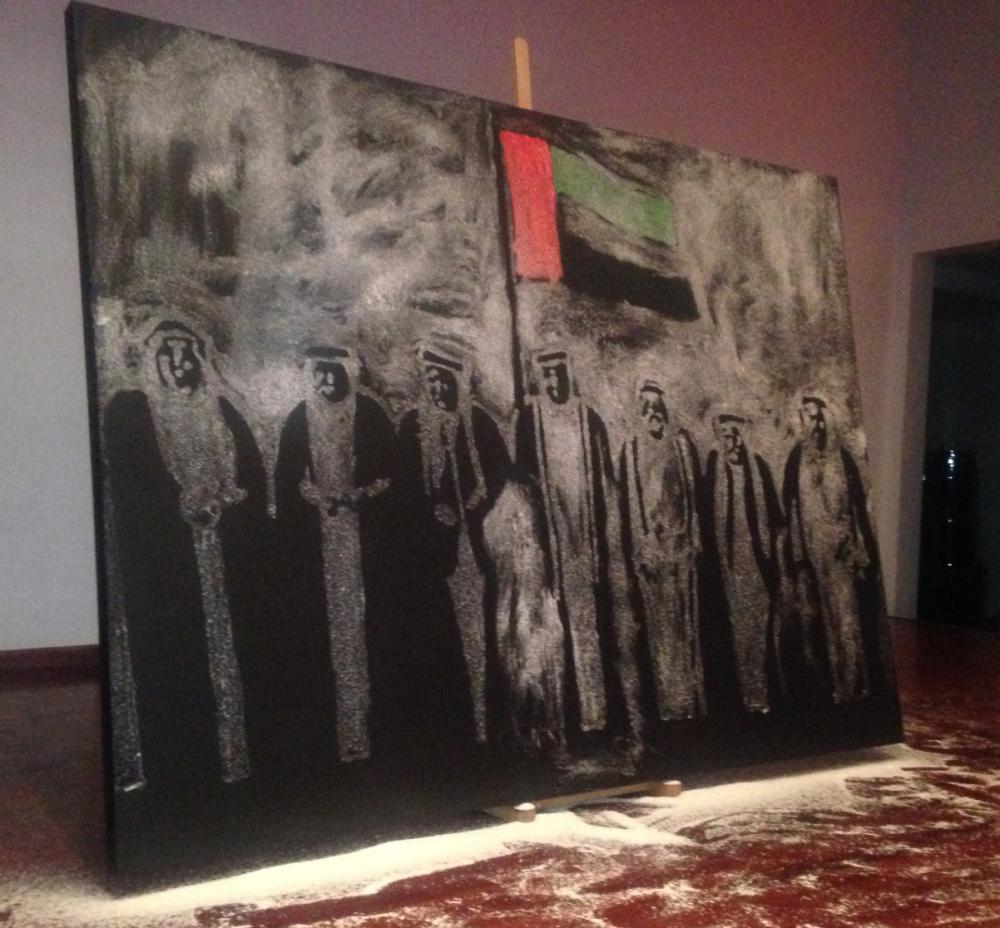 Sylvain Tremblay was invited to do a live portrait of Yves St. Laurent in order to close the event.

A spectacular performance with Tremblay new technique: wax and coconut. The first step is to apply the wax, making the work invisible to the public eyes. Subsequently, Sylvain Tremblay asked to a young newly married couple to spray the work of coconut powder to see appear the portrait of Yves St. Laurent. 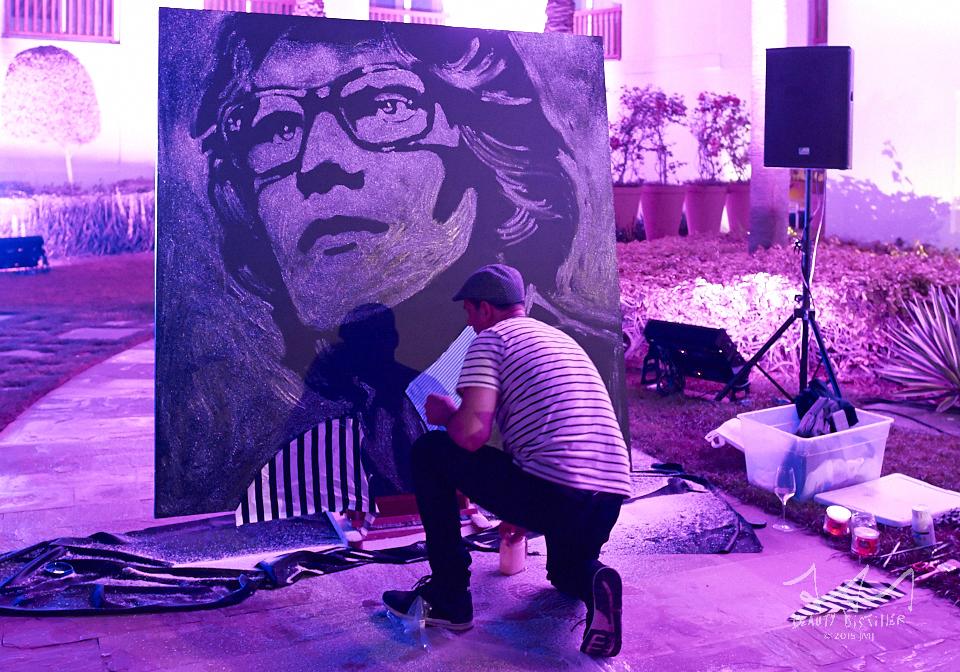 Sylvain Tremblay offered this magnificent painting as part as a gourmet dinner at the auction. The event raised a total of 288,000.00$ to help the foundation keep making life-changing wishes come true. 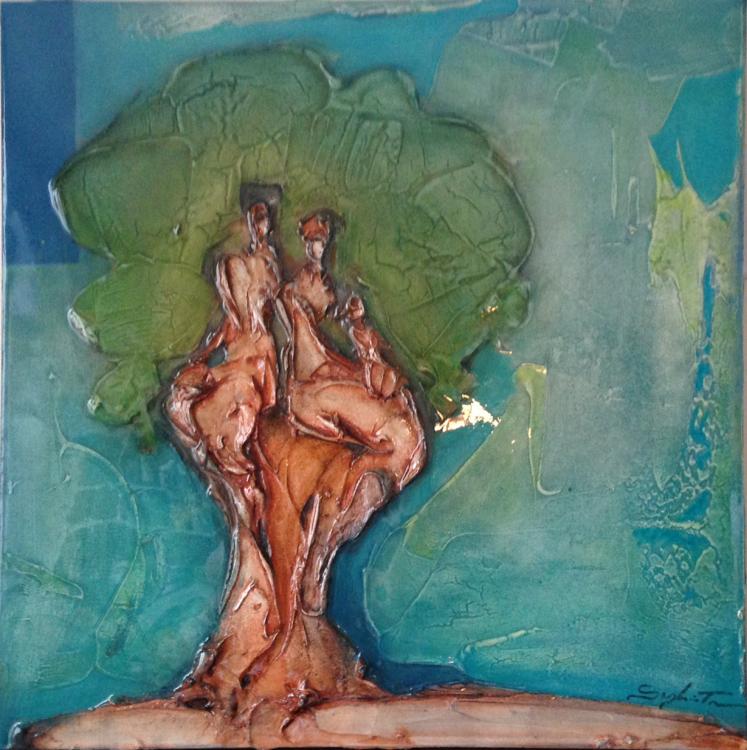 JUNE 28th, 2015
LONDON - On June 28th, Tremblay was welcomed at the Gala of the event FORMULA E Championship, at the impressive Natural History Museum in London.

The artist gave this magnificent painting for auction. Funds raised were donated to the One Drop Foundation and Prince Albert II of Monaco Foundation showing their support for the environmental actions and and to help raise funds for future projects. 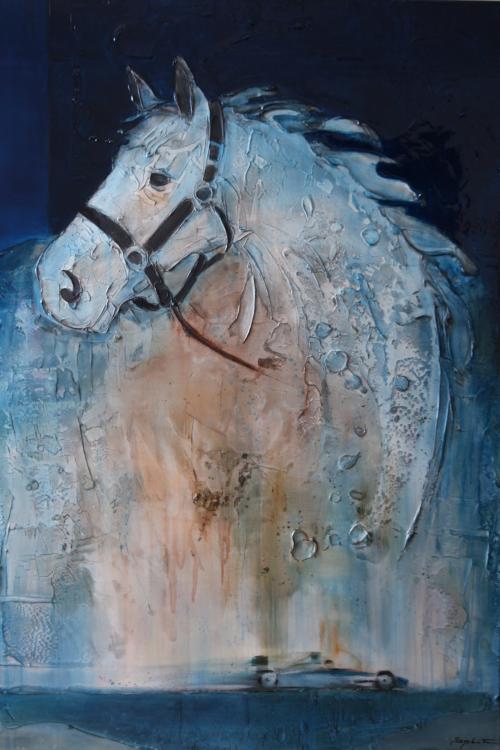 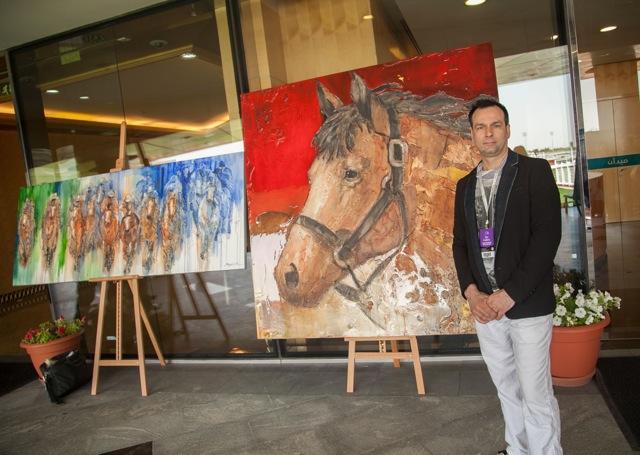 DUBAI - Live painting in a corporate event at the Capital One - Leonardo da Vinci by Sylvain Tremblay.

DUBAI - The artist painted, live, his own interpretation of Mona Lisa at the VIP event of Armani Hotel Burj Khalifa.

ABU DHABI - Sylvain Tremblay at Formula 1. He settled with his matérial to create, live, a new series of works on racehorses.

DUBAI - Sylvain Tremblay painted the biggest portrait of the great Sheikh Zayed from a hot air balloon, using sand and glue, as means to pay homage to some of the UAE's natural elements. Tremblay has been inspired to explore new avenues of technique and use of materiels as he explores different parts of the world.

DUBAI - Artist invited to create a live piece of art. The event took place at Opera Gallery DIFC Dubai for the official lauch of new CALIFORNIA T by Ferrari.

DUBAI - Artist selected, by Canada Embassy, to present pieces of art as part as the 4th edition of Canada Week of Dubai and Abu Dhabi.

SHANGHAI - Artist selected, by Canada Council and Cirque du Soleil, to present a piece of art at the Canada pavilion of the Shanghai World Expo.